Drought has been a hot topic since before the summer. We talked about the extent of this phenomenon, farmers and plants’ resistance to the water crisis caused by climate change, and possible solutions with Federico Citta, external consultant for La Piemontesina.

La Piemontesina is an agricultural kindergarten founded between 1982 and 1984 in Chivasso, in the Piedmont region and includes cultivated fields, a nursery, and a didactic farm where children learn through educational activities developed in contact with nature. zeroCO2 collaborates with La Piemontesina by providing and planting forest trees, such as poplars, and fruit trees, such as peach trees. 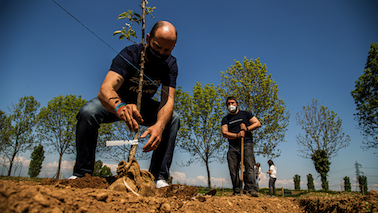 Drought 2022: Where does it come from, and what is its extent?

The drought we are now experiencing is the result of several processes that started last summer: except for the very short rain period in September 2021 and the snowfall on the 8th of December, it did not rain for the entire winter. This year, we were taken by surprise: we were more than aware of the drought resulting from glaciers’ melting, but we did not expect such an intense winter dry spell.

This process moved the water table lower and caused soil dehydration in the long term. The natural evaporation point of the soil has increased from 8 metres to 15 metres, so even old trees with deep roots can no longer drink. Therefore, our crops arrived exhausted in March, with the wheat almost dead.

Since we are far from the sea, we do not observe salinisation but rather a progressive drying out – a precursor to desertification. Aridity results from capillarisation, i.e. the underground evaporation of water that rises from the deepest layers, although it shouldn’t.

In addition, the temperatures reached 30 degrees in the first weeks of May, two months earlier than usual: none of our crops was ready to withstand those extreme temperatures, causing the loss of most of the plants planted during the spring. Moreover, hail is also hitting hard, with enormous damage to crops.

How does La Piemontesina cope with drought?

We had already experienced water scarcity a few years ago and momentarily solved the situation by closing the canals we use to irrigate our fields. Many farmers considered that period a transitory issue, but as I had already predicted and reported, this phenomenon is constantly and gradually worsening year by year. This year, we implemented an emergency plan and proceeded with manual irrigation. However, it was unthinkable and impossible to cover all 2000 trees planted this year without the aid of an automated system.

“I hope it will be a year to forget, but I know we have to be prepared: the climate is changing, the glaciers are disappearing, and our historical water supply no longer exists.”

When it starts raining in the mountains, we have 15 “sponge” days in which the water falls until the valley through the Orco Torrent and the Dora River. Surely, we need to start storing water to use it when needed in times of drought. Thus, we are requesting to build a small water well in the long term aiming to change the irrigation methods and create a porous pipe or a drip system. We are not used to this system, as  our crops did not need it until now, but we had never seen a die-off as we did this year.

We are implementing a radical change at the farm level: you must adapt quickly, otherwise; you can’t keep up with climate change. So we have started introducing new crops such as hemp, a very hardy plant with little need for water. This change is revolutionary, as opposed to farmers who continue to produce corn for cattle and are subjected to companies promoting chemicals for extensive farming. 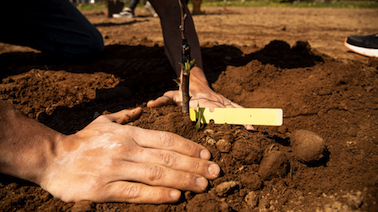 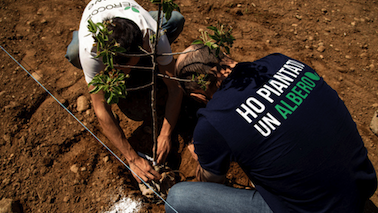 What are possible solutions?

Concerning water storage, private reservoirs are truly expensive. Thus, it would be helpful if there were incentives to promote this practice in the future.

On the other hand, besides selecting and planting certain cultures, it would be key to adopt a minimum of agroforestry. This year, we were surprised by the unexpected positive results we had with hemp: the plants grew about a metre taller in the shade of other trees, such as poplars or large oaks. Farmers used to believe that trees take away nutrition and clutter. Still, it seems that the opposite is happening: the theory of agroforestry to mitigate temperatures and shade the fields a bit more is probably not as wrong as they used to say.

We should therefore go back to planting trees on the edges of cultivated fields at the expense of fewer quintals of production. Another point is tackling deforestation and increase native plants’ reforestation. Without forests and bushes there is no more fauna and no more life, there is only desert.

Palm oil is back. And so is deforestation.

The war in Ukraine is threatening the preservation of tropical forests worldwide. Soaring prices and the shortage of sunflower oil produced and exported by Ukraine and Russia are pushing multinational food companies and local producers to return to palm oil, together with the increasing deforestation and annihilation of ecosystems by large-scale agribusinesses.

zeroCO2 was born in Guatemala, where today we collaborate with around 60 farming communities. Today we tell the story of Monte Carmelo, of collective education and social development projects developed thanks to sustainable agriculture.