“Drought also stems from the lack of maintenance of the irrigation systems. if 100 litres of water start to fall from the source upstream, only 20 litres arrive at the last tap downstream. Along the way, there may be leaky valves or micro-holes in the pipes.”

– Gianpaolo and Lorenzo, founders of the Wild Farm Cürnigia

Gianpaolo and Lorenzo are lifelong friends from Corniglia, a small town of 300 inhabitants in the coastal region of Liguria. Gianpaolo has been working in the family restaurant and the tourism sector for seven years, while Lorenzo graduated in Economics, Tourism, and Territorial Development at IULM in Milan. It was Lorenzo who came up with the idea of the Wild Farm Cürnigia, a Farm 2.0, whose activities began as a hobby during the pandemic.

“At first, we started cleaning the lands behind Lorenzo’s house. Gradually, we realised that we wanted to concretise this project, combining experiential tourism with agriculture: on the one hand, we prepare and cultivate the land by removing scrubs and building dry stone walls. But our project doesn’t stop there: we aim to provide tourists with authentic experiences allowing them to embed in local traditions at 360°.” Through the project, Gianpaolo and Lorenzo create social impact for and with their fellow villagers while giving tourists a sustainable option to experience the essence of the Cinque Terre Nature Park.

The Wild Farm includes a didactic vegetable garden and a farm with several animals, including goats, geese and chickens, a shop above the Corniglia railway station with our locally-produced food products, and a laboratory in San Bernardino. “Our idea is to create a vertical supply chain, starting from planting and cyclically cultivating various crops to directly selling local foods produced with little to no waste.” In addition to alimentary products, they offer various local experiences: from the famous aperitivo to yoga classes in their fields.

Drought in the restored vegetable gardens of the Wild Farm Cürnigia

The Wild Farm began to collaborate with zeroCO2 last winter 2021. The soil preparation for the lemon grove plantation took seven months, but it was worth it: “Despite the summer drought, the results were fantastic: the 200 lemon plants are all healthy. On the one hand, we took extreme care of the soil almost daily where we had previously planted tomatoes; on the other hand, we were lucky: the plots had been abandoned for 40 years and had a layer of compost that made them extremely fertile.”

Drought in the fields recovered by Gianpaolo and Lorenzo varies significantly between seasons, they explain: In winter, there was plenty of water, while in summer, almost none. “We had to start storing water in tanks and go to turn around the valve system at night, so we could irrigate the fields.”

In Corniglia, the drought that has affected the fields stems not only from climate change but also from infrastructural issues and lack of maintenance. “There is a lot of water supply in our areas, but the lack of maintenance of valves and pipes has led to leaks all along the line: if 100 litres of water start to fall from the source upstream, only 20 litres arrive at the last tap downstream. Along the way, there may be leaky valves or microholes in the plastic pipes, which are prone to break due to heat and with the passing of time.”

Lorenzo explains that the water supply system in the area is very old: it consists of tanks with water basins upstream connected to a pipe from which the water descends due to pressure by fall. “These systems are 100 to 150 years old and have always been well maintained by the people in the village. Many higher plots have been abandoned in the last 50 or 60 years, and scrub vegetation has covered them all. The valves are clean, but you cannot follow the route of the pipes. In addition, they are located in dangerous paths above overhangs that can be reached with ropes, creating extra difficulties for older people.”

Drought in Liguria: Water Tanks to go irrigate the fields of the Wild Farm, Corniglia, Liguria 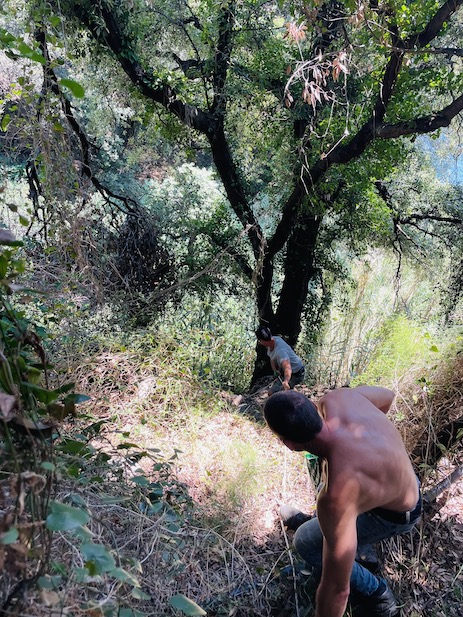 Operationally, the guys have used a drip irrigation system since the very beginning of their activities, combining it with agroforestry systems. “The pipes we use have a hole every 30 cm. Thus, we decided to plant various kinds of vegetables under the lemons, including tomatoes, eggplant, friggitelli and onions. This way, we aim to waste as little land or water as possible while also avoiding monoculture,” Gianpaolo says. Starting next year, the guys would also like to introduce a mulching cloth to waste even less water and keep the soil wetter.

Institutionally, Lorenzo and Gianpaolo have joined the council in the Irrigation Consortium to pursue restoration projects and improve local facilities. “With the help of an engineer, we are writing a project for the Cinque Terre National Park to refurbish the country’s pipelines and counteract water waste by putting in solenoid valves and electronic controls. We want to create a system to store water and keep it aside during the winter. We must prepare for the coming summer, which will definitely be worse than the current one.”

Another key solution Wild Farm founders promote is community outreach to sensitise on introducing new irrigation methods and encourage responsible water use. “Some farmers still open water hoses like they were fire hydrants. In this small town of 300 inhabitants, it’s hard to get people to change their habits, especially the older ones. But change starts with us, and we must all row in the same direction.”

Stories of desertification: from Brazil to the Mediterranean