“We know we won’t save the world, but nobody will tell us we didn’t try.”

A couple of months ago, the Spanish journalist Isabel Miranda joined us on our trip to Guatemala to learn about our projects from within. Out of that experience, Isabel published this in-depth article in the Spanish newspaper ABC, telling the story of Virgilio Galicia: son of ex-guerrillas, teacher and co-founder of zeroCO2. In this blog article, we introduce Virgilio, the Guatemalan root of our project.

Virgilio: rebellion in his veins

Virgilio was born 32 years ago in the forests of Petén, a region in the north of Guatemala: here, he grew up among mahogany, cedar, mango and avocado trees. Son of ex-combatants in the Guatemalan Civil War, the legacy of the rebellion still runs through his veins: today, trees are his weapons to fight against climate change and create a positive environmental and social impact. Through reforestation and awareness-raising, Virgilio aims to make a tangible positive impact in the more than 60 farming communities collaborating with zeroCO2.

The Civil War in Guatemala

Between 1960 and 1996, Guatemala was torn apart by bloody armed conflict between left-wing fighters, the guerrilleros of the FAR (Fuerzas Armadas Rebeldes), born from the ashes of the Movimiento Revolucionario 13 de Noviembre (MR-13), and militarised state forces.

Multiple dynamics triggered the civil war, mainly related to internal tensions arising from inequalities in land ownership (on the land question in Guatemala, we wrote an in-depth section in this article), poverty, and social and racial exclusion, especially of the indigenous peoples. It is precisely native and indigenous peoples who have been the main victims of the conflict: more than 200,000 people died or disappeared.

Although the Peace Accords were signed in 1996, Guatemala remains one of the Central American countries with the highest rates of inequality and poverty. Those levels are exacerbated in the child, indigenous (mainly Mayan) and rural populations.

With a degree in Pedagogy and Educational Sciences from the University of San Carlos in Guatemala, his goals have never strayed far from the forest: it is here that Virgilio lives with his family, combining his work in reforestation projects with teaching and environmental education.

Virgilio e Andrea, the founders of zeroCO2, met while working in an international cooperation project focusing on education. “In the international cooperation field, many people talk, but they concretize very little. We act as a group and get collective results: this energy is our strength,” says Virgilio, hoping to always provide more support to indigenous communities in the future.

Virgilio is fighting against the disappearance of Guatemalan forests and the advancement of monocultures, particularly palm oil, through the reforestation projects implemented via zeroCO2.

According to data from the Institute of Environmental Science and Technology (ICTA-UAB), this intensive crop has expanded by 600% in the last decade and is replacing 40% of tropical forests. As Isabel points out in the ABC article, the effects on biodiversity and the progressive impoverishment of the soil mean that the land will become fertile again in about 25 years.

The importance of agricultural training. Virgilio and Amedeo in our nursery in Petén, Guatemala. 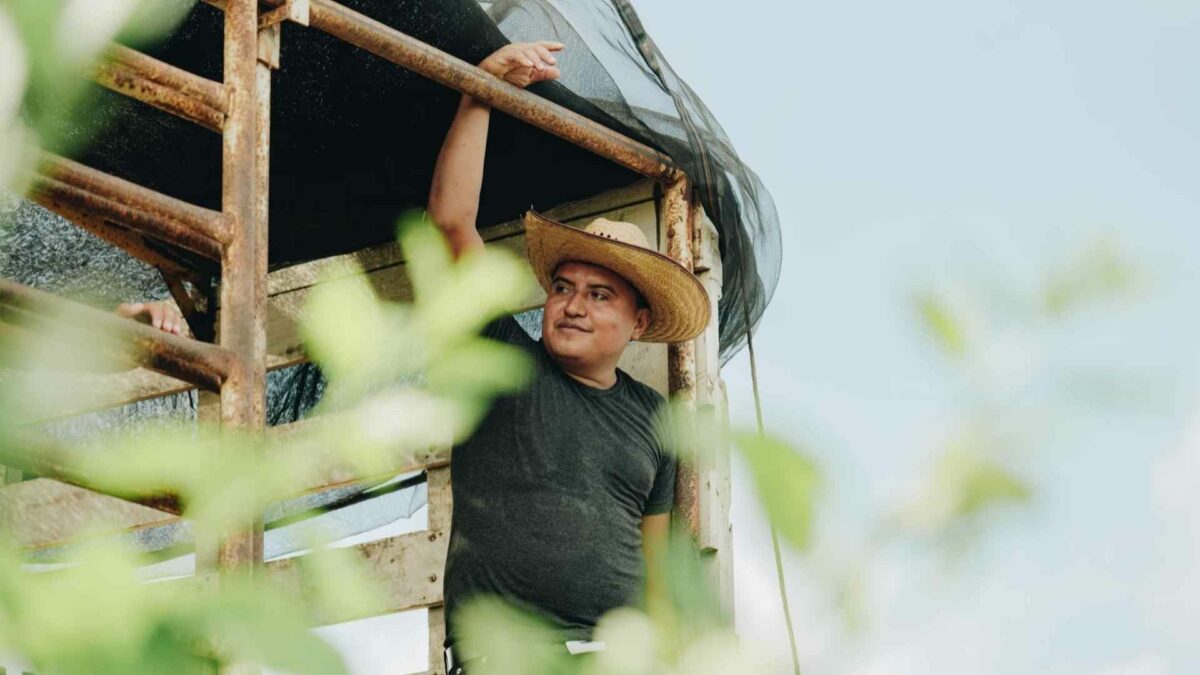 Taking care of trees is fundamental.

Virgilio: education and awareness as a driver for sustainable development

Virgilio’s training and educational vocation are intertwined with the goals of zeroCO2. He explains that – sadly – part of the problem in Guatemala is the lack of awareness. “It is unfortunate that the feeling for nature is getting increasingly lost.” Many people are unaware of the effects of mass deforestation, “but if you come and explain the project, they change their perspective,” adds Mariela, his wife. She supports him and collaborates on projects.

One of zeroCO2’s main objectives is educating farming communities about environmental care, teaching them that collaboration is the primary weapon to preserve their land and identity. Virgilio offers new tools to farmers in zeroCO2 partner communities to resist the effects of the climate crisis by learning how to revalue native seeds and crops and integrate them into balanced agroforestry systems.

Through agricultural training, local communities reappropriate their role as guardians of biodiversity and become micro-entrepreneurs: they are taught how to take advantage of the fruits of the earth to achieve food security and economic revenues.

In three years, zeroCO2 has planted half a million trees and trained more than 60 Guatemalan farming communities in good sustainable development practices.

Stories of desertification: from Brazil to the Mediterranean